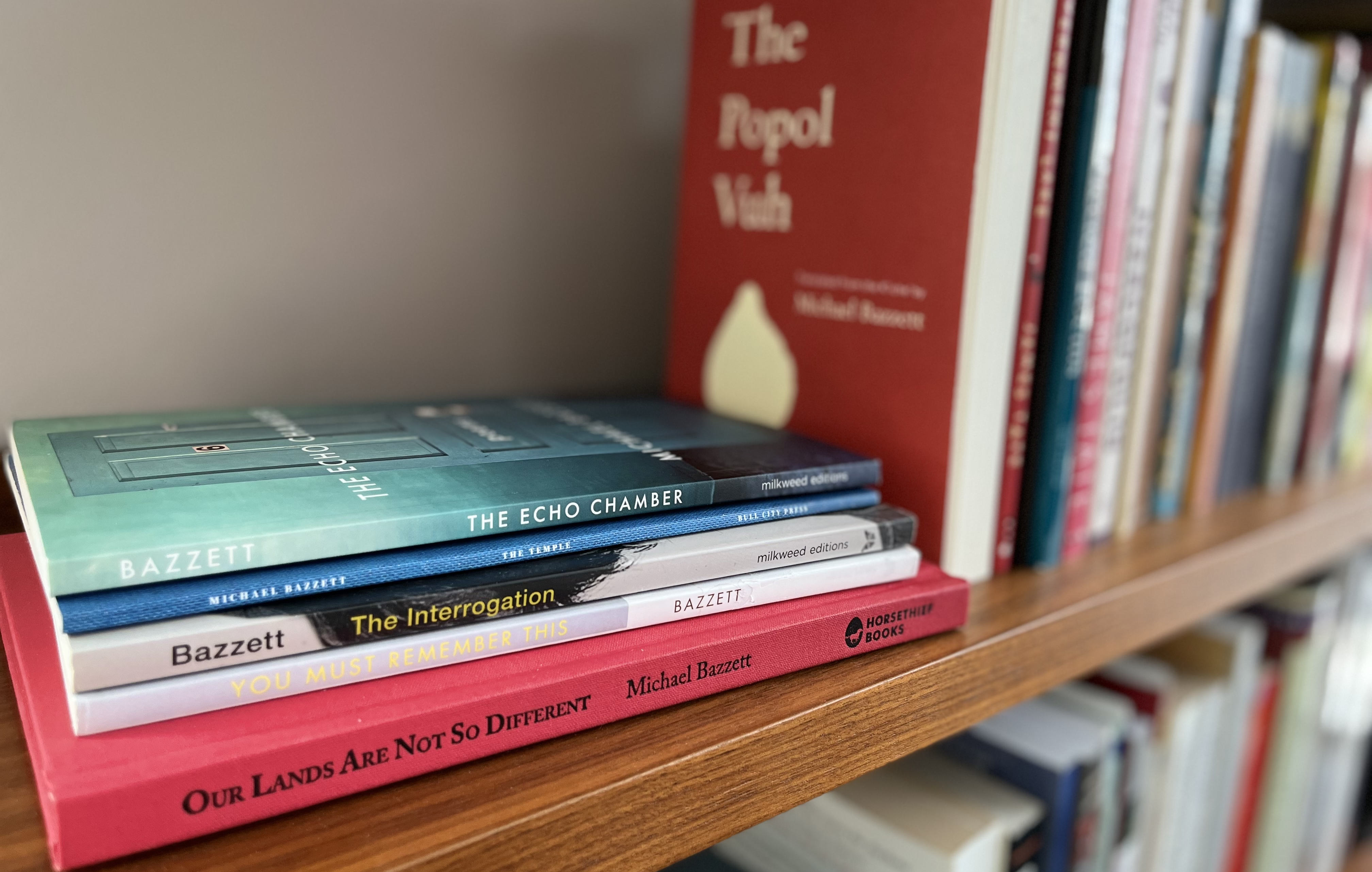 From the poet and translator of The Popol Vuh, The Echo Chamber is a collection that explores the myth of Echo and Narcissus, offering a reboot, a remix, a reimagining.

“Narcissus was never one to see himself // in moving water. // He liked his image / still.” In The Echo Chamber, myth is refracted into our current moment. A time traveler teaches a needleworker the pleasures of social media gratification. A man goes looking for his face and is first offered a latex mask. A book reveals eerie transmutations of a simple story. And the myth itself is retold, probing its most provocative qualities—how reflective waters enable self-absorption, the tragic rightness of Echo and Narcissus as a couple.

The Echo Chamber examines our endlessly self-referential age of selfies and televised wars and manufactured celebrity, gazing lingeringly into the many kinds of damage it produces, and the truths obscured beneath its polished surface. In the process, Bazzett cements his status as one of our great poetic fools—the comedian who delivers uncomfortable silence, who sheds layers of disguises to reveal light underneath, who smuggles wisdom within “rage-mothered laughter.” Late-stage capitalism, history, death itself: all are subject to his wry, tender gaze.

By turns searing, compassionate, and darkly humorous, The Echo Chamber creates an echo through time, holding up the broken mirror of myth to our present-day selves.

“With a virtuoso deployment of allegory, parable, dialogue, soliloquy, and performance, and via the mechanics of the joke, the poems in The Echo Chamber boom and toll with history and myth, and into the scorching present tense.” – Diane Seuss

“If he’s not already acknowledged as such, The Echo Chamber should establish Bazzett as one of our best cartographers of human strangeness.” – Matthew Olzmann

“This is work that dwells in the complexity and grotesqueness of being seen – and of seeing ourselves – through the fractured mirrors of pop culture and consumption.” – Adrian Matejka

“The poems are rich in humor, biting in satire, Kafka-esque in strangeness, and tender with human feeling.” – Dan Beachy-Quick

“Of poets writing today, I can’t think of any whose metaphors are more satisfying than Michael Bazzett’s—and The Temple is his best work yet. These poems are strange-making and surprising, full of wry humor and unexpected turns, but so wise, so eerily just-right, I take them as truth.” – Maggie Smith

“Michael Bazzett’s poems are winsome with a little bit of wicked. In The Temple, Bazzett’s poems narrate old stories—of belief, of ageing, of the body—through new openings. His gods have regrets, cigars, and departures. His angels have bawdy senses of humour and are as immediate as they are intimidating. These poems are cinematic—a mouse watches a burning city, people travel tunnels the wrong way, a man spies his older self on a street but doesn’t interrupt him. You can milk a stone in the world of these poems, and everybody is conversational, chatty, full of grief and longing. Lurking in the corners of The Temple is time, looking at all that’s changing: where once he could bound, a dog now ambles, writing poetry.” – Pádraig Ó Tuama

“The Temple invites readers to drop their bodies and sink into a realm of strangeness so breathtaking, so alive with mystery and mysticism, that the place begins to feel en-chanted, even holy. Recognizing that we often crave more space for the imagination and more certainty about our worth as living things, Michael Bazzett pushes us to seek out an imperfect God, not as a source of answers, but as a mirror in whose reflected presence we can find acceptance, solace, and light.” – Faisal Mohyuddin

In the beginning, the world is spoken into existence with one word: “Earth.” There are no inhabitants, and no sun—only the broad sky, silent sea, and sovereign Framer and Shaper. Then come the twin heroes Hunahpu and Xbalanque. Wielding blowguns, they begin a journey to hell and back, ready to confront the folly of false deities as well as death itself, in service to the world and to humanity.

This is the story of the Mayan Popol Vuh, “the book of the woven mat,” one of the only epics indigenous to the Americas. Originally sung and chanted, before being translated into prose—and now, for the first time, translated back into verse by Michael Bazzett—this is a story of the generative power of language. A story that asks not only Where did you come from? but How might you live again? A story that, for the first time in English, lives fully as “the phonetic rendering of a living pulse.”

By turns poetic and lucid, sinuous and accessible, this striking new translation of The Popol Vuh—the first in the Seedbank series of world literature—breathes new life into an essential tale.

“For nonscholars, the first test of any translation is simply whether it’s pleasurable to read, and Bazzett’s limpid, smoothly paced version is more than satisfying on that score. And it’s a good thing to be reminded, perhaps especially now, and perhaps especially by a text originating in Guatemala, that “However many nations / live in the world today, / however many countless people, / they all had but one dawn.” – New York Times, Best Poetry of 2018

“With Bazzett’s translation, The Popol Vuh has been reincarnated . . . in a clear, elegant English that allows the reader to visualize the epic adventure of the Hero Twins and the universal story of human creation. It’s a boon for readers everywhere.” – Rain Taxi

“Mr. Bazzett’s translation offers a welcome path into the power of The Popol Vuh as beautiful literature. . . . [his] arrangement and format give the work its own authentic-sounding rhythm and cadence, something that is lost a bit in the recent scholarly editions . . . Mr. Bazzett writes that his intent was to create a more accessible source for students, ‘a version of the myth they could disappear into, a verse version that truly sang.’ He has succeeded.” –Wall Street Journal

“[Bazzett’s] translation of The Popol Vuh is a superb demonstration of literary translation, and the book, as a whole―containing an authentic and transparent translator’s introduction, the creation epic itself, and a reader’s companion―should be incorporated into every literary translation program.” – Literary Review

An uncanny collection of poems that plumbs our capacity for cruelty and for wonder.

Who? A speaker at once questioner and questioned. An artist who embraces and resists what his work requires of him. “A naked / man in a crowd.”

What? Poems at once surreal and vulnerable, refusing to hide their uncomfortable truths behind their wildest imaginings.

Where? In the mind, where “Nobody fails at meditation / like I do.” Outside dreamlike cities. In the rich earth under a simple mattress. In new, disorienting fables and seemingly familiar folktales.

When? As a child, spurning his mother. As a young man, seeking wisdom and peace. And as an older man, looking back at what he once was.

Suffused in psychology, uncertainty, and desire, The Interrogation is a catechism of the self—or selves. Inside this collection’s hall of mirrors, faces double and multiply endlessly, and voices echo, laugh, and taunt. Why? these poems ask. Why does art demand sacrifice? Why does the heart want what it wants? And how do we escape loneliness?

The Interrogation is an accomplished collection, unsparingly honest, infused with yearning and laced with dark humor.

“Michael Bazzett’s staggering collection, The Interrogation, is the record of a poet curious about, and in dialogue with, absolutely everything. An island paradise? “No stallion land, / but good for goats.” Death? “A hole behind him / in the exact shape of his life.” If poems are buildings erected to house our wonder, then Bazzett has gifted us a metropolis—one teeming with life and endlessly hospitable to visitors. We are the beneficiaries of such good fortune, this generous making.” – Kaveh Akbar

“In The Interrogation Bazzett establishes himself a keen questioner of the eye and ear; a poet fully able to construct and inhabit this world, and those beyond, through lush aural and visual engagement. With the lyrical dexterity and sonic authority of a master craftsman, Bazzett gleans epistemic truths from both natural and preternatural sources and delivers crisp, unforced poems of sheer beauty. Readers will find themselves rapt by Bazzett’s audacious and perfect storm of song, symbol and earnest sight.” – Airea D. Matthews

“Our lives are interrogated by strangeness in this brilliant collection by Bazzett, his best yet. From the moment a city dissolved in the speaker’s absence, I knew this book was something special, and how special it is to read the record of Bazzett’s keen looking and bizarro dreaming. I didn’t know I wanted poems about moles being comets or pubic hair performance artists, but I did. I needed this book. I needed to laugh and wonder and wince and gasp. I needed to see all this glorious seeing. You need this book too. You need to walk through Bazzett’s funhouse and let these mirrors do their alchemy on you.” – Danez Smith

“His works are often reminiscent of Russell Edson, bizarre poems that feature malevolence and a chilling atmosphere balanced by humor and twisted logic.” – Publisher’s Weekly

“Like any good surrealist, Bazzett uses laserlike precision to craft his images.” – The Minneapolis Star Tribune

Our Lands Are Not So Different – (Horsethief Books, 2017)

“Bazzett is a master of lacing the deadly serious with hilarious absurdities – not something you encounter in poetry often. Frequently surreal, always powerful and precisely new.” – Will McGrath

“Bazzett’s poems. . .do the necessary and paradoxical work of making us laugh at our terrors and shudder at our joys.” – The American Literary Review

You Must Remember This – (Milkweed Editions, 2014)

“Michael Bazzett’s first collection holds a smeared pane of glass up to the world, tilts it back and forth, and lets the distortion becomes the image.” – Jamaal May

“In this collection of dreams and dissolve, Michael Bazzett evokes the impermanence of body, identity, relationships, and memory.” – Melissa Broder

“Bazzett delivers a debut collection whose mercurial sensibility and loose-woven free verse place him somewhere between Robert Hass and Patricia Lockwood. His pages stand out, amid so many other mildly quirky or eccentric first books, because their verse comes closer than most to presenting real people in his imagined world. Strange events—part charm, part menace—take place throughout. Like Hass, he can veer into a confessional mode and then pull knowingly out. Yet his collection is never slowed down by self-consciousness: instead, it’s entertaining in its sadness, off-kilter, and defiantly hard to explain.“ – Publishers Weekly

“I know we reviewers aren’t supposed to give away review copies, but that student needed the book right then and there. Poems like this, sometimes, can’t wait to be read.” – The Rumpus

“You Must Remember This is one of the most exciting debuts I’ve read in some time.“ – Green Mountains Review

“The book rewards the reader with strange and heartbreaking moments that resonate with a profundity just beyond the reach of explanation.” – The Minneapolis Star Tribune

“When I read the first few lines of Michael Bazzett’s Imaginary City, I thought, ‘There’s no way he can keep this up for the entire poem.’ He did. After finishing the first three poems, I muttered aloud, ‘But it can’t stay this good for the entire book.’ It did.” – Jamaal May

“Absurdity so smart and cutting that the reader trusts the voice and comes away rattled, even delighted.” – Lauren Hilger